After such an outstanding campaign, Paul Rowley’s side have booked their spot in the top six and are certainly a team to fear for the rest of the pack. Playing such free-flowing and exciting rugby, fans and pundits alike have pitched the Red Devils as a real underdog.

In the previous meeting between the two sides, Salford ground out a 33-16 victory in the baking The Salford Stadium sun and all but secured their spot in the play-offs.

Available until Wednesday 7th September: season ticket discount is available from the stadium or online through your network account. Each person will need to be a season ticket holder to qualify for the discount.

Can’t make it to the stadium before 4pm on Wednesday? Log in to your member area and book your tickets online to qualify for the season ticket discount before midnight on Wednesday.

You can collect your pre-purchased tickets from 1pm until 8pm Thursday or from 10am until 3pm on Friday. Orders cannot be placed after 3pm on Friday. Tickets bought on match-day from John Smith’s Stadium are cash only and from the turnstiles, not the ticket office. We strongly advice to purchase your tickets from the The Salford Stadium before travelling.

Due to postal service strikes, tickets are for collection from the stadium only.

Matchday – Away fans cash at the turnstiles only): 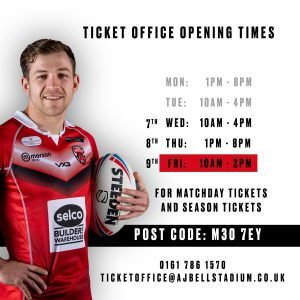 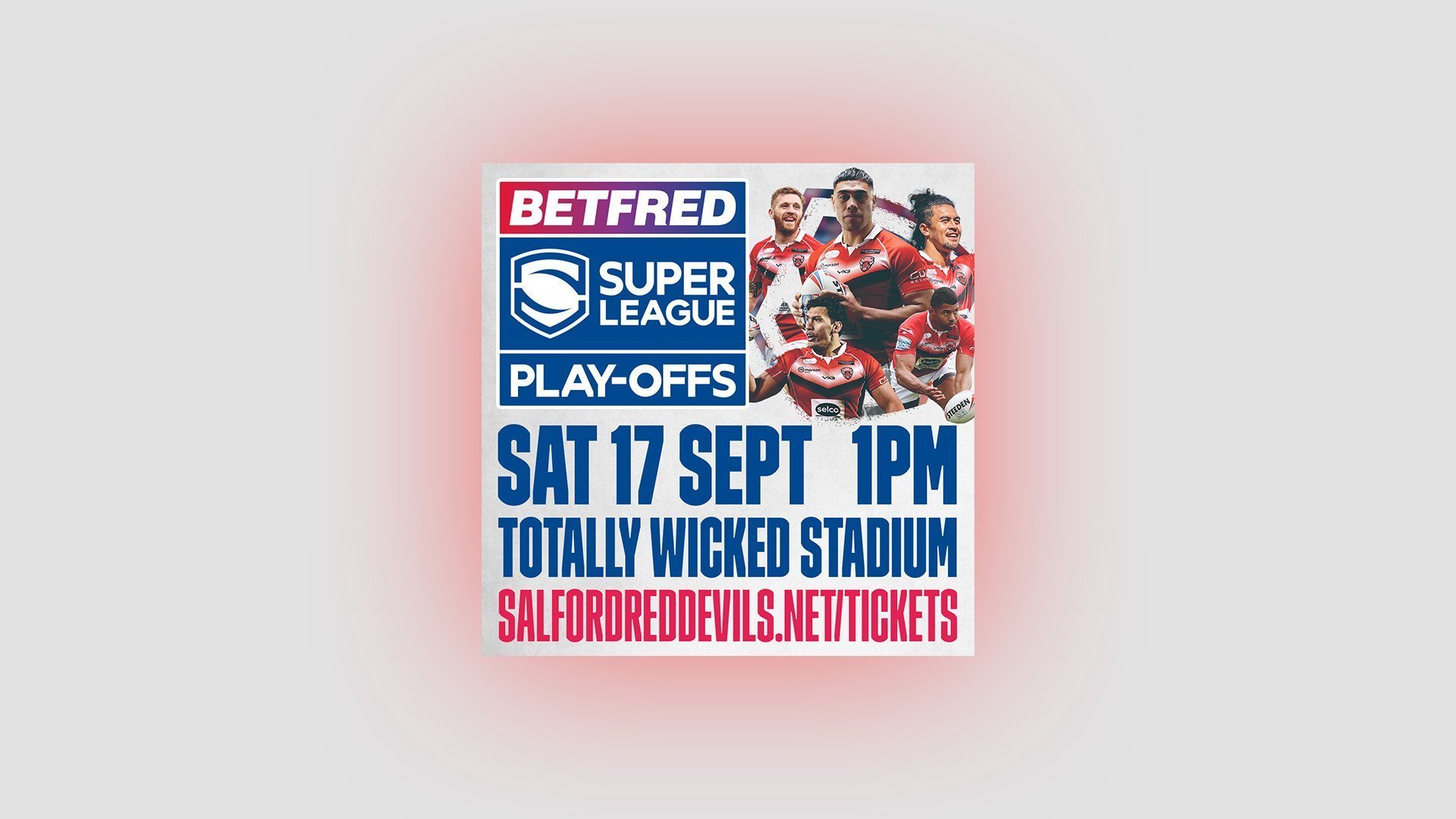 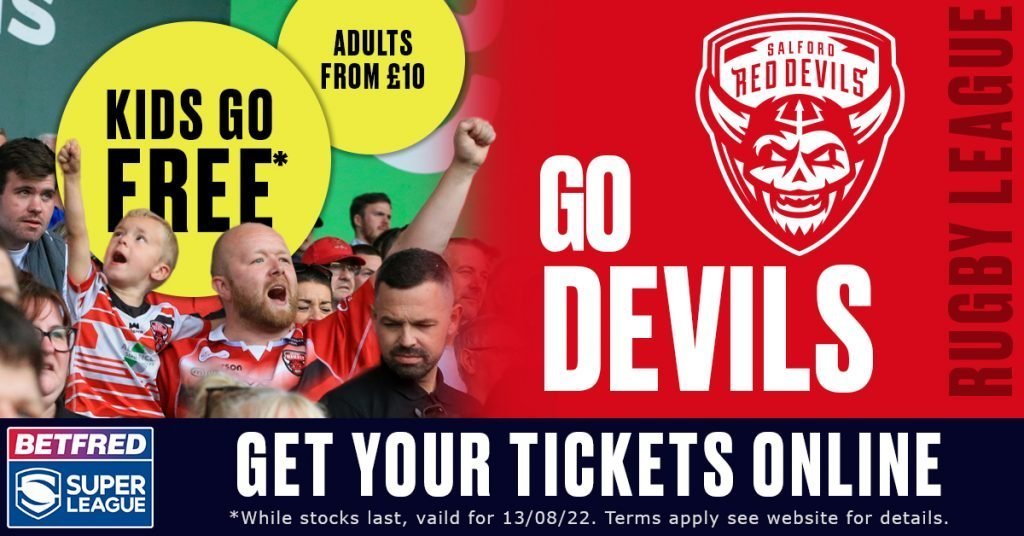 Round 23 is an exciting fixture as Huddersfield Giants come to Salford for the first time this season. We’re using this game as a fantastic opportunity to encourage more people to come and give rugby league a ‘try’! For this special event, tickets are available for the East Stand at the The Salford Stadium at the following prices: Adults £10 each (age 17+), 16 and under go free*. Everyone needs a ticket so please collect from the stadium ticket office or you can order online. Online incurs a booking fee and tickets bought on the day of the match also incur a £1.50 booking fee.

Salford Red Devils are delighted to announce that 2023 season tickets are now on sale, at early bird prices!

Firstly, the Club would like to thank all of our fans who have supported the Red Devils this season. After almost two years of restricted access, 2022 has finally seen live sport return to normality for spectators and we hope the Salford faithful have enjoyed the ride so far, as we continue to maintain our Play-Off spot.

This past year, Salford Red Devils have been working tirelessly both on and off the field, to strengthen our links in the community and to establish international partnerships. Since the end of 2021, Salford have launched an LDSL, PDRL and Women’s team. Both the LDSL and PDRL have been well received in the community and their popularity continues to grow. Our women’s team lifted the 2022 League Cup trophy on Sunday 31st July and have been consistently at the top of the Women’s Championship. We’ve also launched the REDS programme and seen the return of the Reserves grade, which both play a key part of the player pathway here at Salford.

In terms of partnerships, our link-up with Wales Rugby League and Coleg y Cymoedd is progressing massively. A number of Welsh players are now part of our Reserves squad, thanks to the pathway that this partnership has opened up and with the help of the Supporters’ Trust. Internationally, we are partnered with The Southwest Florida Copperheads, Rugby League Federation Ghana and Queensland rugby league team, Ipswich Jets.

Regarding our work in the community, Our ‘Building the Future’ programme is absolutely thriving. In total this year, we have welcomed over 3,500 children, teachers and coaches to watch the ‘Building the Future’ Betfred Super League games, many of whom were experiencing their first taste of live sport. Over 100 schools from across Greater Manchester, Cheshire and Lancashire have brought groups to the games. The Salford Red Devils Official School Partner programme has seen 95 schools sign up since its launch. Salford Red Devils Foundation has delivered over 60 rugby league festivals, with 68 individual schools taking part. Activities which are open to boys and girls has seen more than 2000 individual school children take part in rugby league activities this year alone.

On top of all of the above, 2023 will be our 150th year. There will plenty going on next season to celebrate this, so make sure you’re with us on the journey!

We’re pleased to say that we will be hosting an open day to collect your season tickets, for the first time since the pandemic. Details will follow later in the year on the event, but we are looking at hosting this during the second week of December.

Early bird prices, which started today, end on the 15th of December. 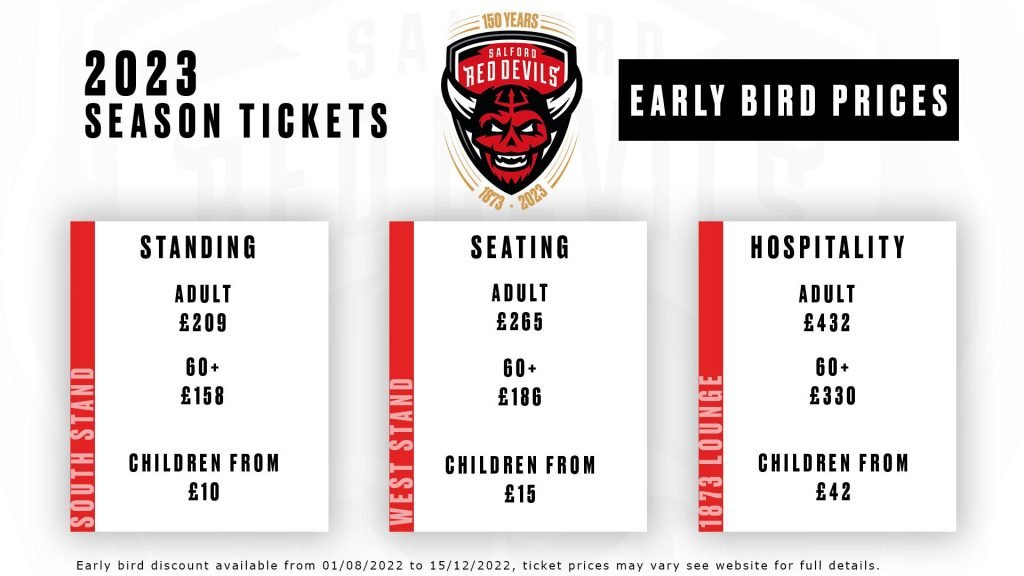 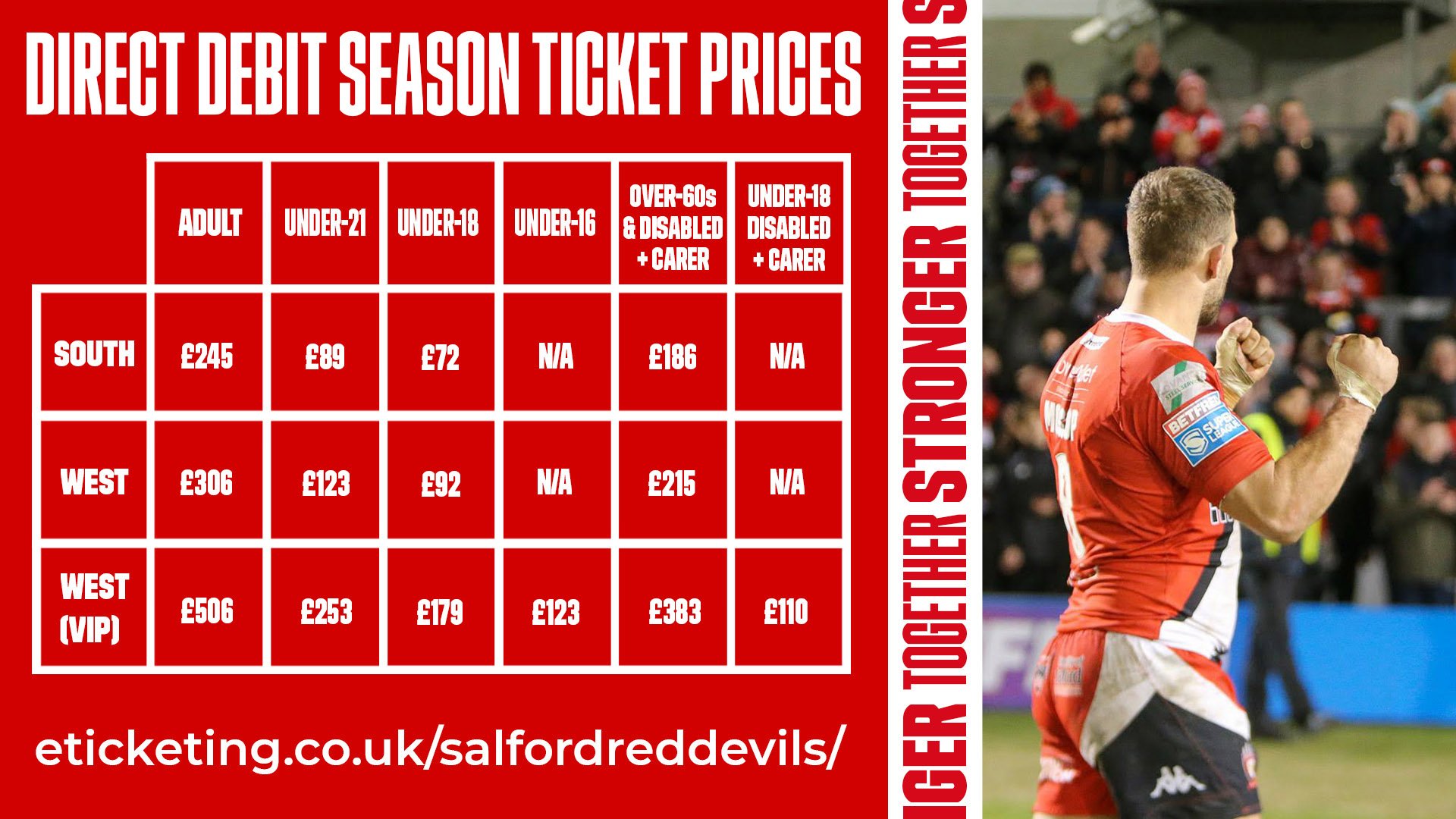 This allows supporters to split payments at the newly introduced early bird price, over eight months. Adults can therefore attend every Betfred Super League home match for less than £30 per month.

In order to make a Direct Debit purchase, supporters should email their client reference number, name and address to: ticketoffice@ajbellstadium.co.uk They will then receive a call back from the ticket office.

Anyone who is unable to email, should call 01617861570 and choose option 1 for tickets, then option 1 for Salford Red Devils. If there is no answer, then please leave a voicemail and the ticket office staff will get back to you. The ticket office will be open 9am-5pm on Monday.

Supporters not looking to retain existing seats from the 2020 campaign also have the option to buy online, by choosing the direct debit price category after selecting their seats HERE.

Here are the Direct Debit prices for 2021 Season Tickets in full: 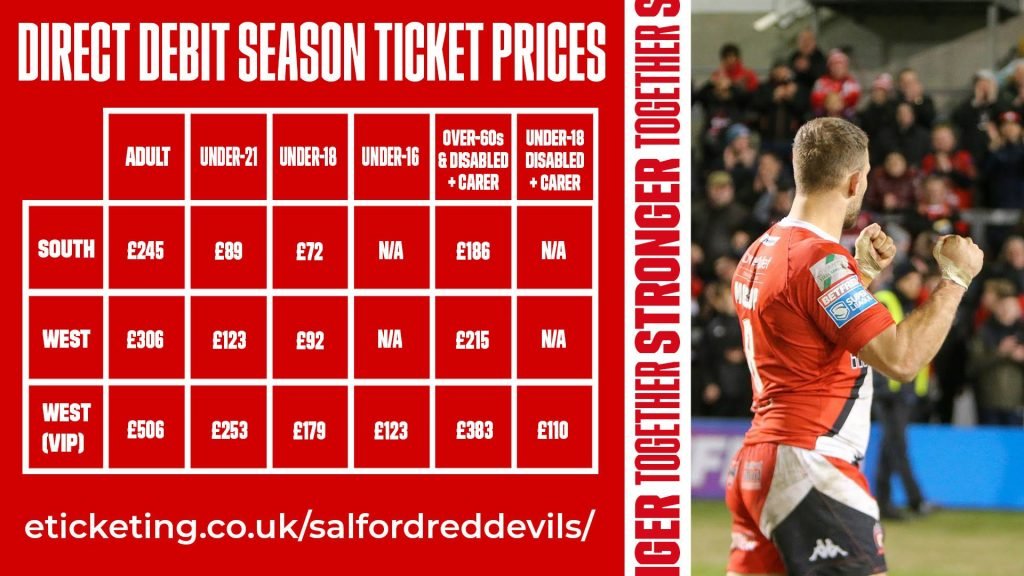 The direct debit payment date is on the 15th of every month, regardless of at what point in the month supporters sign up. Your 2021 Season Ticket can be bought online HERE at: http://www.eticketing.co.uk/salfordreddevils

All season tickets priced below £50 are only available to purchase in full, in order to prevent additional costs being passed onto supporters. Under 2s season tickets are available free of charge and along with disabled+carer tickets, must be purchased with an email to: ticketoffice@ajbellstadium.co.uk

Emails and phones are monitored from 10am-5pm Monday-Friday, but lines are expected to be busy due to high demand. If you are unable to get through, there is a voicemail where you can leave your name, client reference number and a telephone number, to request a call back.

Supporters can save more by purchasing season tickets in full and details on that can be found HERE.

Here are the prices for 2021 season tickets: 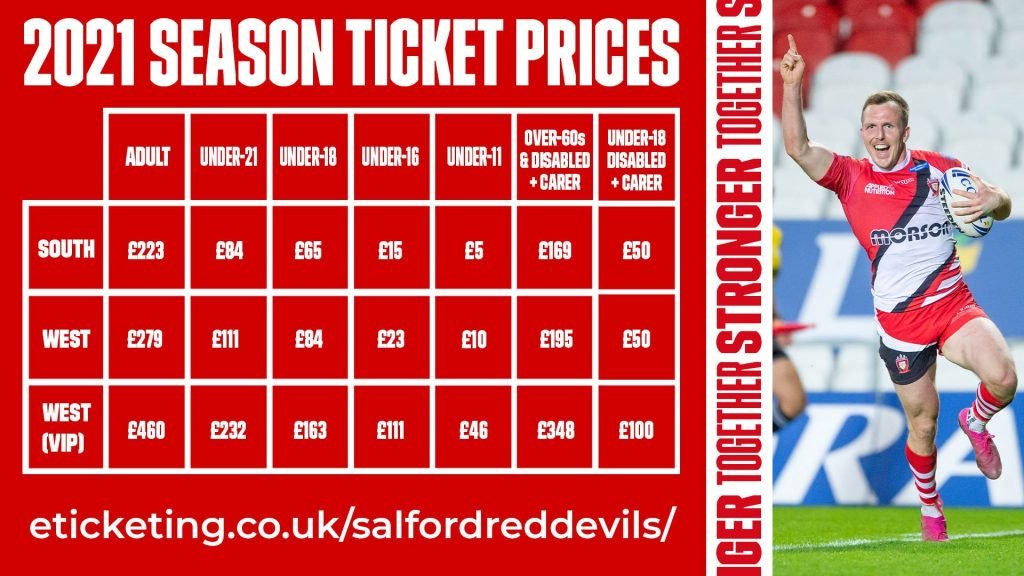 Betfred Super League clubs are planning to welcome supporters back into stadiums from the first round of the competition in 2021.

Salford Red Devils would like to thank current season ticket holders for their overwhelming display of dedication throughout the 2020 campaign. The players will do everything they can to reward that support next year.

If you have any more questions regarding Season Tickets, check out our FAQ’s HERE, or email: enquiries@salfordreddevils.net 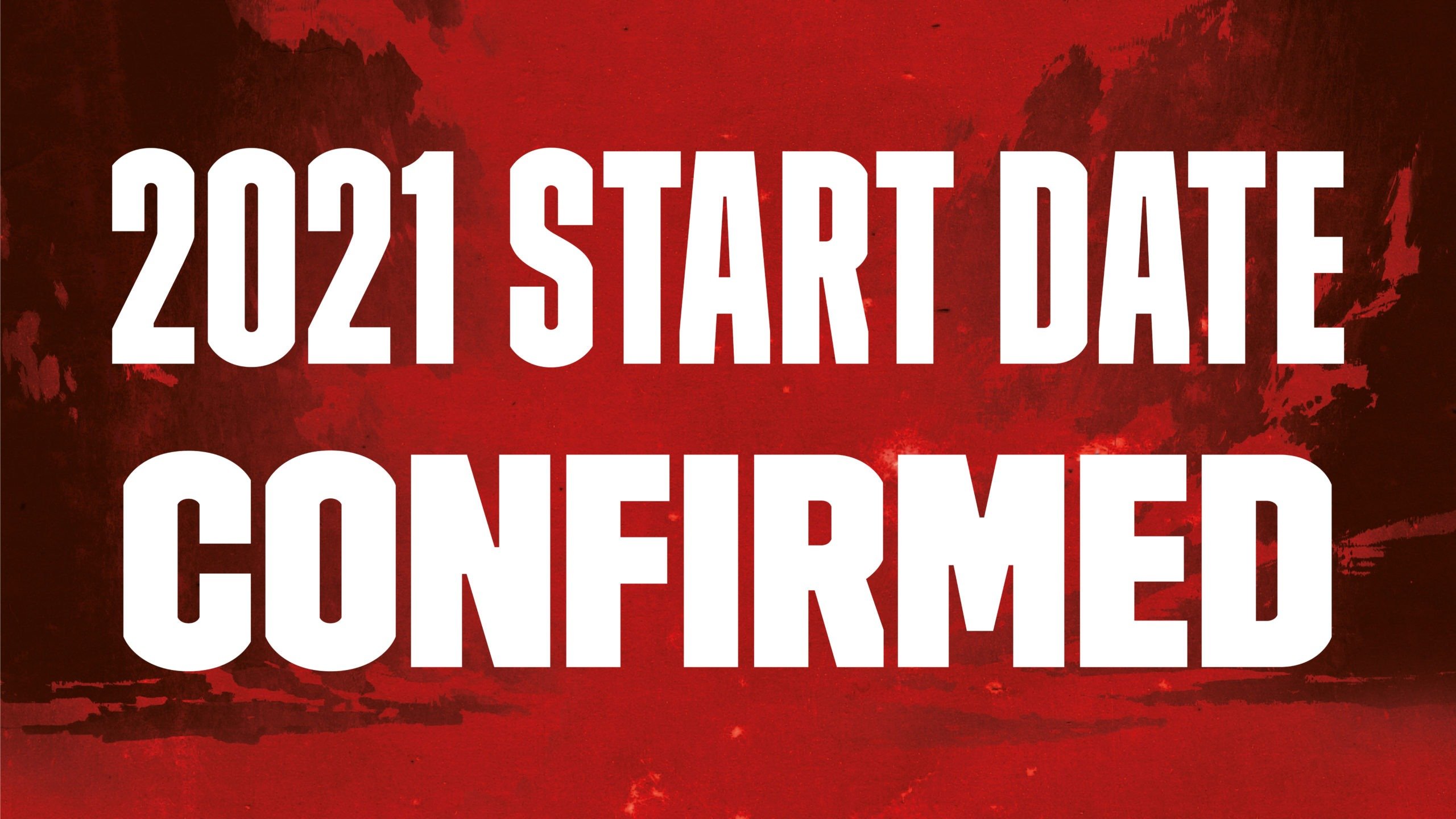 Salford Red Devils season tickets for the 2021 campaign are now on sale.

The later season start date is a result of the impact of Covid-19 on the extended 2020 campaign and the desire of Super League clubs to give players a much-needed period of recovery and a full pre-season.

Dacia Magic Weekend also makes a welcome return to the 2021 calendar. It will be played at St James’ Park, Newcastle, on 29/30 May.

Clubs will play 13 home fixtures in a 27-game Regular Season, including the Dacia Magic Weekend. The later start results in a repeat of the six-team play-off format used in 2020.

⬇️ Adult prices have been reduced across all areas!

Super League Executive chairman Robert Elstone said: “With our players performing at the highest level, late into November, it is important that we give our players time to recover and prepare properly for the 2021 campaign.

“Many of them will be looking to force themselves into the selection decisions for the Rugby League World Cup and pre-season will be a key part of their plans.

“What is also clear with the ongoing uncertainty around Covid-19 is that a later start date gives us a better chance of playing more games in front of fans in 2021.”

Fixtures for the 2021 Betfred Super League season will be released in January season tickets are on sale now. Click HERE for further details. 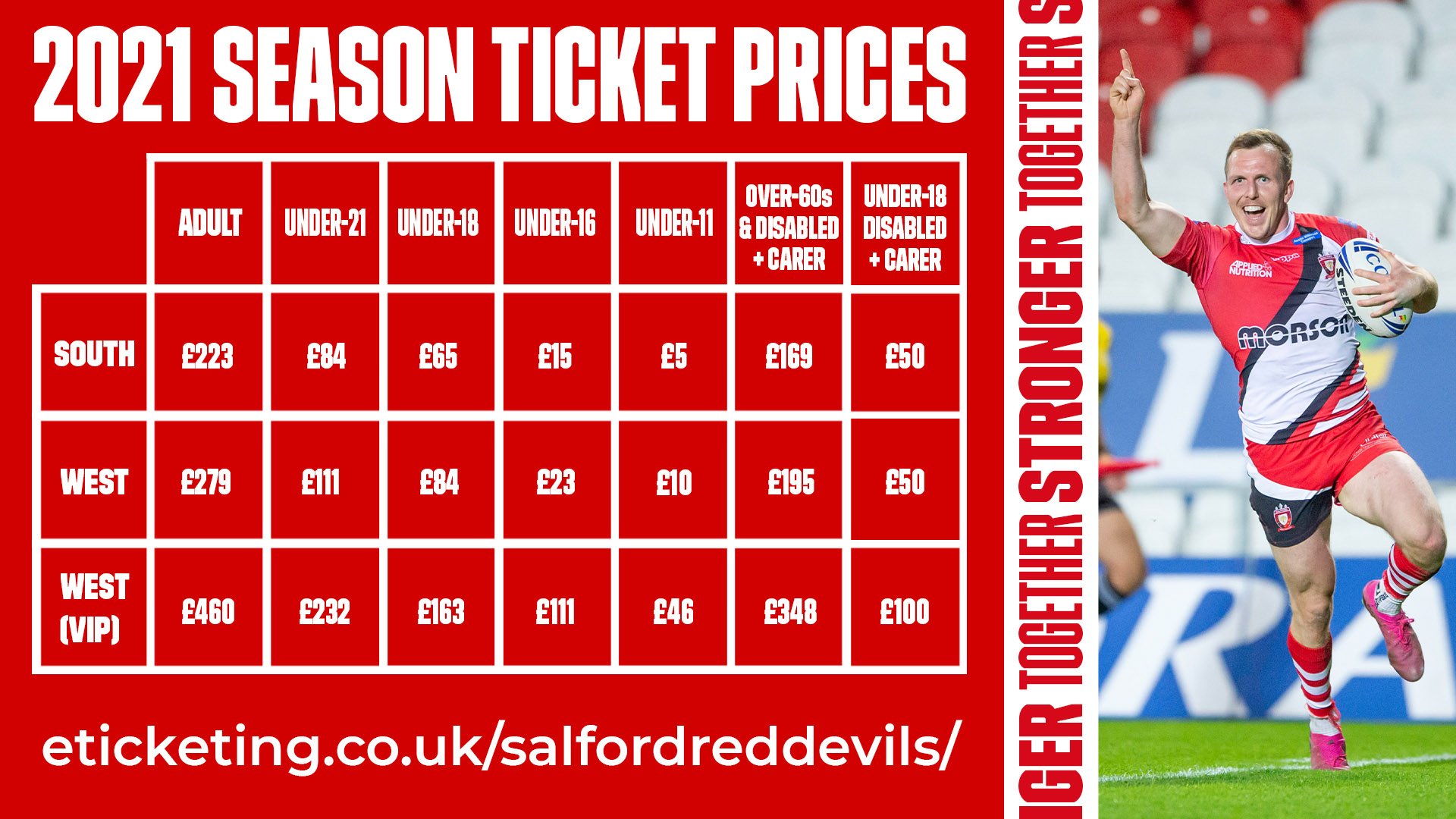 Adult prices have been reduced across all areas for what is set to be an exciting season for Red Devils supporters, after the team reached major finals in both of their previous two campaigns. With restrictions keeping supporters out of stadiums for the majority of 2020 campaign, the Club cannot wait to reunite in 2021.

Here are the prices for 2021 season tickets:

Betfred Super League clubs are planning to welcome supporters back into stadiums from the first round of the competition in 2021.

Season tickets can be purchased online HERE 24/7 at: www.eticketing.co.uk/salfordreddevils

Alternately, supporters can email: ticketoffice@ajbellstadium.co.uk with their client reference number, name, address, phone number and requirements, to request a call from the ticket office. Please also email the ticket office for assistance, if you have difficulties logging in online.

Due to current government restrictions, the ticket office will not be open. Supporters who are unable to purchase digitally can call 01617861570, then select 1 for tickets and 1 for Salford Red Devils, in order to speak to a member of staff from the ticket office.

Under 2s season tickets are available free of charge and along with disabled+carer tickets, must be purchased with an email to: ticketoffice@ajbellstadium.co.uk

Emails and phones will be monitored from 10am-5pm Monday-Friday, but lines are expected to be busy due to high demand. If you are unable to get through, there is a voicemail where you can leave your name, client reference number and a telephone number, to request a call back.

Salford Red Devils would like to thank current season ticket holders for their overwhelming display of dedication throughout the 2020 campaign. The players will do everything they can to reward that support next year.

If you have any more questions regarding Season Tickets, check out our FAQ’s HERE, or email: enquiries@salfordreddevils.net 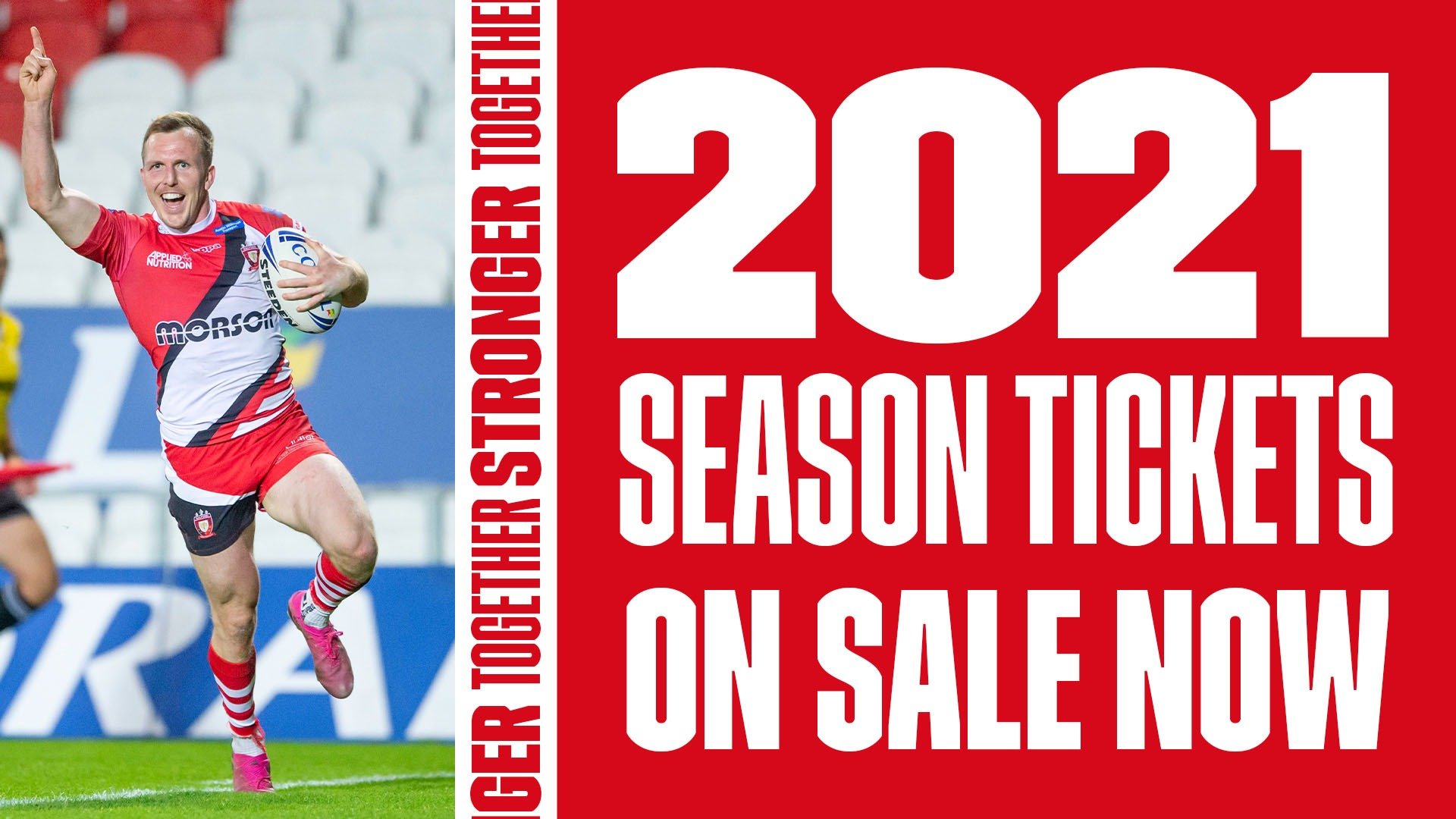 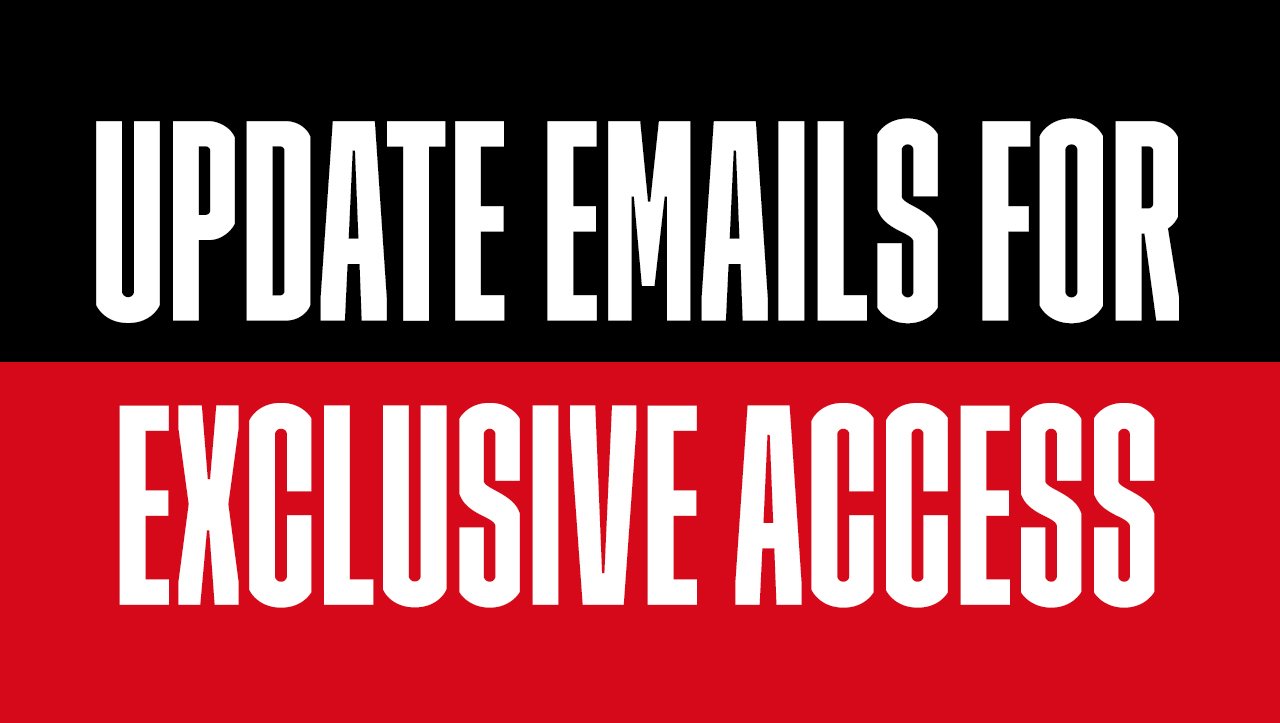 If your number is included in the list above, it is requested that you send an email with your client reference number, name and preferred contact email to: enquiries@salfordreddevils.net 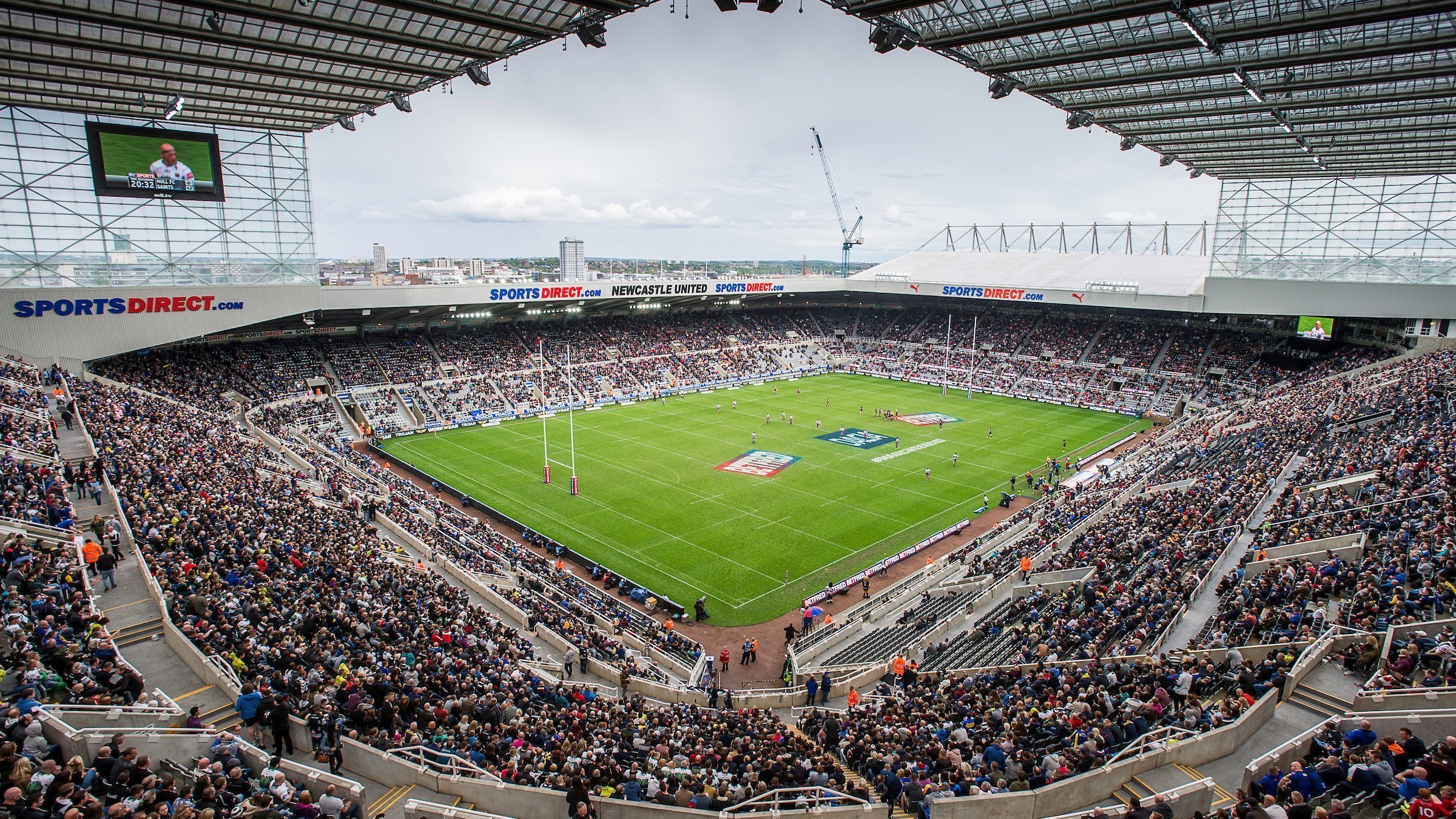 Due to the ongoing Covid-19 restrictions, and further to its postponement in April, Super League regrets to announce that Dacia Magic Weekend 2020 is cancelled.
The good news is that we have agreed in principle that next year’s Dacia Magic Weekend will take place at St James’ Park, Newcastle on 29 and 30 May 2021. Tickets purchased for this year will be valid for the 2021 event and therefore you do not need to do anything.
We thank you for your continued understanding and patience at this uncertain time.
Should fans that have bought tickets already not be able to attend in 2021 then, as per the terms and conditions of sale, you will be entitled to a refund or credit note. For further details and for a full list of the updated FAQs please click here https://superleague.co.uk/ticket-faq 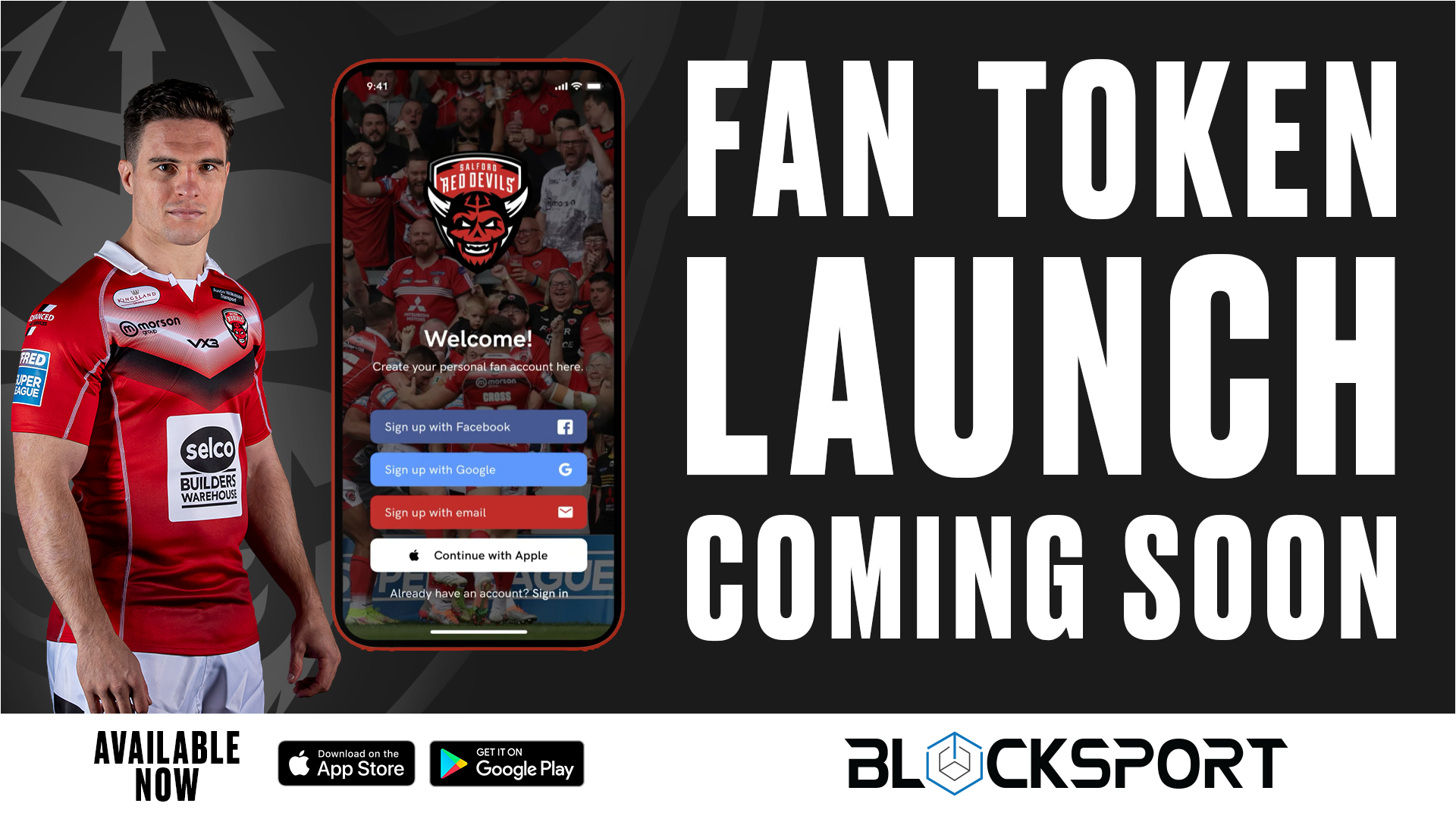 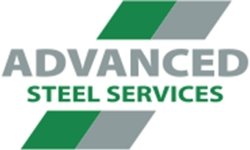 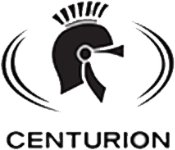